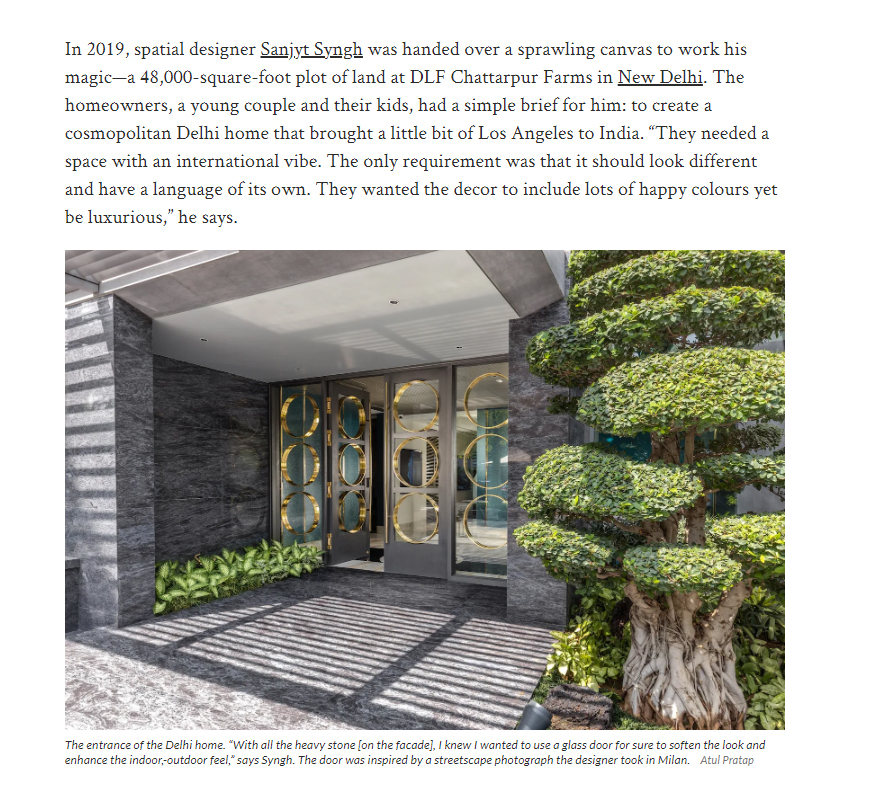 Designed by Sanjyt Syngh, this sprawling Delhi home is bold, elegant, and filled with character.

In 2019, spatial designer Sanjyt Syngh was handed over a sprawling canvas to work his magic—a 48,000-square-foot plot of land at DLF Chattarpur Farms in New Delhi. The homeowners, a young couple and their kids, had a simple brief for him: to create a cosmopolitan Delhi home that brought a little bit of Los Angeles to India. “They needed a space with an international vibe. The only requirement was that it should look different and have a language of its own. They wanted the decor to include lots of happy colours yet be luxurious,” he says. Conceived as a single volumetric form, the 15,000-square-foot Delhi farmhouse is divided into two zones. The ground floor houses the formal living and dining rooms and common areas, while the first is purely private with the family bedrooms and lounge. The luxurious square footage is undoubtedly a draw, but what brings the home to life is Syngh’s signature knack for blending art and functionality. Clad in Bianca Moonface marble and Laminam ceramic tiles, the entrance creates a neutral base for the designer’s more unconventional experiments indoors. In a first of many dramatic vignettes, the water feature here is accentuated by sculptures by Alex Davis that capture the split second when a drop of water touches the surface.

Incidentally, Syngh tells us this highlight was a discovery that he chanced upon at the AD Design Show shortly after he began working on this project!